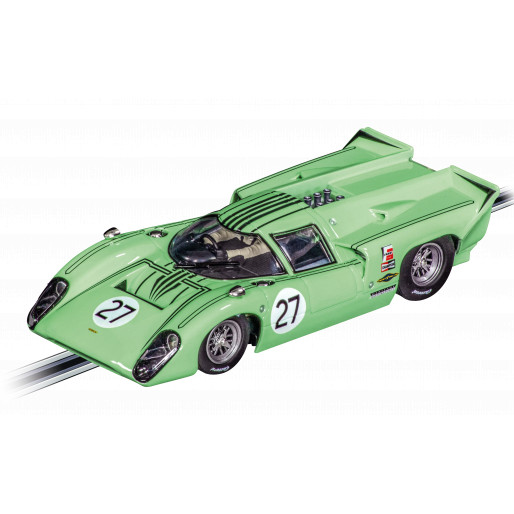 Mint-green lightning
In 1965, the British racing car manufacturers at Lola designed the LolaT70 as a two-seater racing car for the unlimited Group 7 racing car championship in England and the USA. Even today, the Lola T70 is one of the most successful racing cars ever to have been built in England, although only just over 100 were ever built. The first version was the Lola T70 Spyder. In 1966, came the Lola T70 Mk II Spyder, which was superseded in 1967 by the Lola Mk III Spyder. The Lola T70 MKIIIb roared to victory with an unbelievable 720 hp. Seeing this British racer on Carrera racetracks is a treat for all motorsports enthusiasts.

A keen eye for detail
The 1:24-scale no.27 mint-green slotcar version is one-of-a-kind whenever it races on Carrera racetracks. The Carrera model is a faithfully-detailed reproduction featuring realistic front, rear and brake lights. The car is digitally controllable, can also be used on analogue infrastructure, and can also be individually coded.