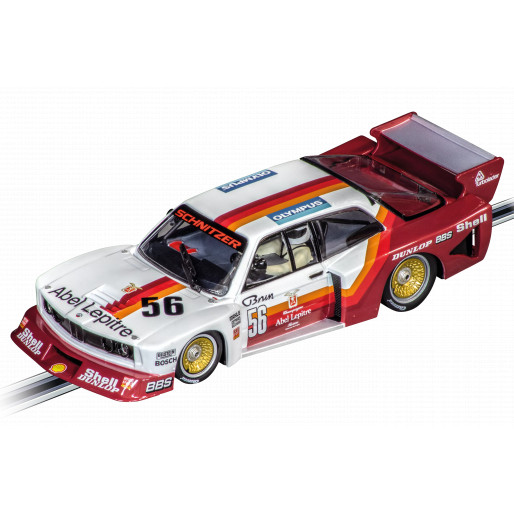 Turbo start
The BMW 320 Turbo Flachbau 'Team Schnitzer, No.56' DRM 1980 was a role model in the motor racing world in 1980, and at 450 hp set standards for the era. Developments in the motor formula led to a triumphal period for the technology involved, and a few years later led to Formula 1 engines with power outputs of over 1000 hp. In 1980, the main sponsor, the Frenchman Abel Lepitre, remained loyal to Walter Brun, enabling the Swiss entrepreneur to purchase a new flat-build Schnitzer BMW 320 Turbo. Brun raced the car to three podium finishes, one of which being at the race on the Norisring circuit.

Blacktop classic
The Carrera DIGITAL 132 BMW 320 Turbo Flachbau 'Team Schnitzer, No.56' DRM 1980 slotcar brings a genuine German motorsports classic to Carrera racing circuits. The car thrills spectators with faithfully-reproduced details, and front, rear and brake lights. The BMW reproduction license has helped to produce a 1:32-scale replica just like the 1980's original. This slotcar can be individually coded, has digital controls and promises unbeatable driving thrills for all Carrera fans.