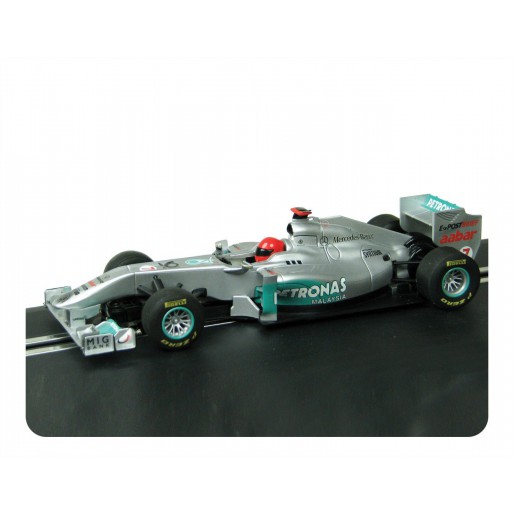 After a poor season on his return to the FIA Formula One World Championship in 2010, 2011 was a make-or-break season for Michael Schumacher.

In 2011 Scumacher found incremental steps, race by race, session by session to a level where you expect him to be – on equal footing with his team partner, Nico Rosberg.  Seven-time former World Champion Schumacher had his best results in Canada, Belgium, Italy and India. Thoughout the season he had eleven finishes in the points.  Schumacher has lost none of his racing instinct.

Ultimately, the story of Schumacher's return well depend on the 2012 season as he continues to get to grips with the car.

Michael Schumacher in any car is a must have for all F1 fans. This Scalextric car will deliver the fast dare-devil moves associated with the German World Champion. The super-fast FF motor is ballistic and the car is fitted with the DPR plug so that you can race on Scalextric Digital and emulate those famous ‘chops’ that Schumacher is famous for.