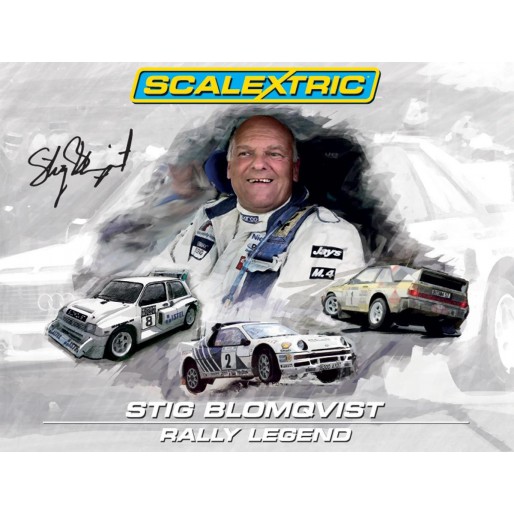 One of the most popular drivers to grace the WRC stage, 1984 World Rally Champion Stig Blomqvist achieved an incredible 11 wins and 33 podiums.  He won his home event, the Swedish Rally, seven times.  His first WRC rally came at home in Sweden in 1973 – and he returned there for the last time in 2006.

Scalextric celebrate the accomplished career of Stig Blomqvist; faithfully modelling three of his memorable drives in three very different machines.  In 1985, Stig claimed a respectable 4th place in the Monte Carlo rally, with co-driver Cederberg, in the No.1 Audi Sport Quattro.

Stig moved from the Audi works team to the Ford works team for the 1986 FIA World Rally Championship.  The No. 2 Ford RS200, driven by Stig and co-driven by Bruno Berglund, retired from the gruelling 33rd Acropolis Rally after an accident, but still finished 11th overall in the 1986 Championship.