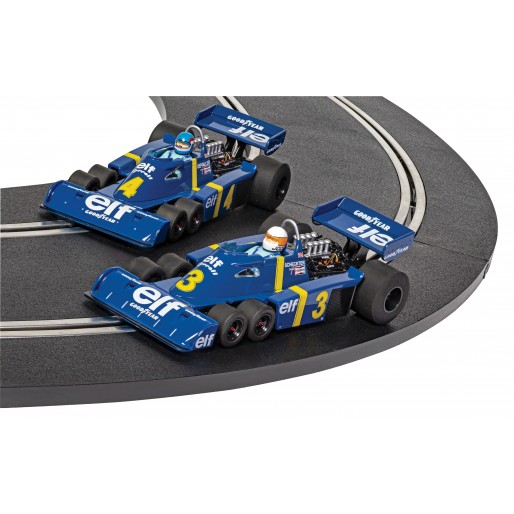 One of the most radical and recognizable concepts ever to see the Formula One track the six wheeled Tyrrell P34 is, at the time of writing, the only six wheeled Formula One car to ever see the track in a competitive Formula One environment. First shown at the end of the 1975 season and making its debut in 1976 the car proved unpopular with both drivers, Jody Scheckter being unimpressed with the cars handling. His team mate Patrick Depailler however was more complimentary on the cars performance.

The car proved to exceptionally good on circuits with long straights and flowing fast bends, but seemed to struggle more with tighter bumpier tracks. It scored its only victory at the 1976 Swedish Grand Prix at Anderstorp with Jody Scheckter coming in first followed by Patrick Depailler second. The early race leader Mario Andretti In the Lotus 77 was eliminated on the 46th lap, thus handing victory to Scheckter, who had also qualified on pole.

This proved to be the highwater mark for the P34, a number of podiums followed but by the following season the concept had reached the limit of its potential and the team reverted to a more standard design before the whole concept was outlawed later in the decade.

This Limited Edition Collector's Twin Pack is sure to be a popular addition to any slot car fan's collection and with only 3000 units available Worldwide, is likely to be as iconic as the six-wheeled Formula One car itself.