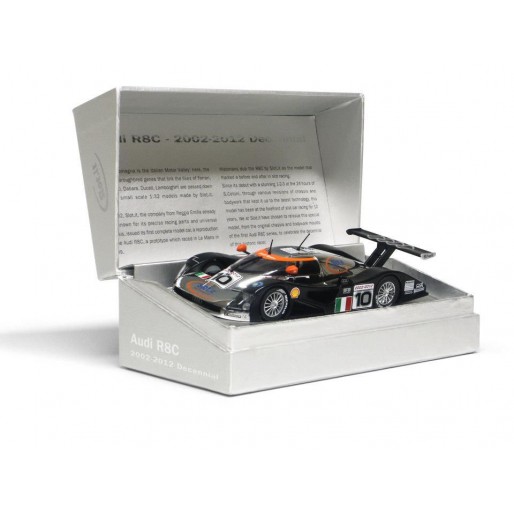 The Audi R8C was a racing car designed by Audi engineer Tony Southgate. It raced only at the Le Mans 24h competition in 1999.
The car featured a monocoque carbon fibre chassis, a carbon fibre body and a 3595cc twin-turbocharged V8 engine. It had a maximum speed of 349 km/h.

James Weaver said that at a certain point during race, the underdeveloped R8C had turned into one of the best cars he ever drove. Neither of the two engaged R8C finished the race. In the years which followed, Audi devoted its energies to the open cockpit version of the R8. In turn, the R8C became the design base for the Bentley Exp Speed 8, who won the Le Mans 24 Hours in 2003.

Slot.it have chosen to reissue this special model, from the original chassis and bodywork moulds, to celebrate the decennial of its first complete model car, which marked a before and after in slot racing and, through various revisions and evolutions, has been at the forefront for 10 years.