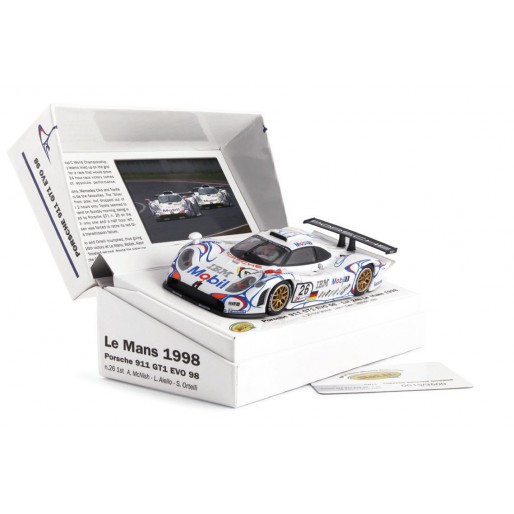 The 911 GT1 EVO 98 was designed by Porsche to compete in the GT1 category in 1998, at the Le Mans 24 Hours and in the FIA GT international championship. In the beginning, the GT1 class cars were Grand Touring cars modified for competitions, but in the last years they got more and more similar to racing prototypes.

98 Porsche GT1 was a brand new car, the first ever built by Porsche with a carbon composite monocoque chassis.
It came equipped with front and rear double wishbone suspensions with pushrod, 18” wheels, carbon brake discs.

In 1998, the FIA GT championship was dominated by Mercedes, but Porsche was able to win the Le Mans 24 Hours. Mercedes and Toyota were faster on the single laps, but the cars from Zuffenhausen were able to finish 1st and 2nd, thanks to their better reliability.