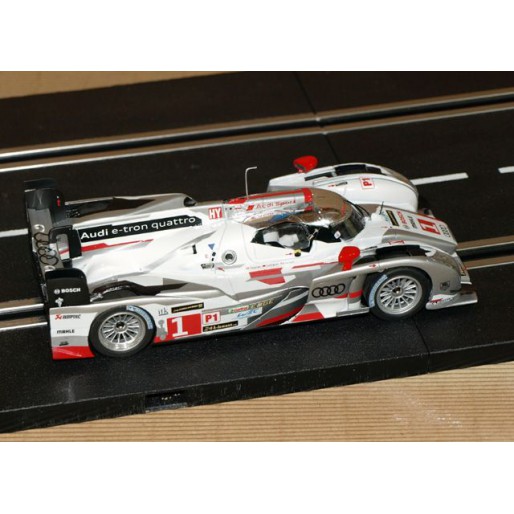 In 2013, 24 Heures du Mans celebrate their 90th anniversary. It is however the only 81st edition.

In the tradition, 2 official teams are going to be in confrontation. Audi returns with an important reliable level and Toyota seems better armed than ever. Luca Digrassi in Audi car number 3 is rookie of the year. Loïc Duval joins the team of the veterans in Audi car number 2. The winner car team is the same in the Audi car number 1.

After the 2012 season during which the R18e-tron Quattro have been dominated on most slow tracks by Toyota TS030, Audi must work harder during winter to improve the performance of the Audi R18. Among the improvements we can notice : new front spoiler - new design of the headlight until the spoiler - thicker nose - front hood with air intakes - the roof is hollowed under the air intake to reproduce the same effect as on some F1 cars - as viewed from the top, the wings have been designed again - as viewed from the top, the wings are completely opened - flaps on sides have been reviewed - the rear bonnet is longer to reach the limit of 5.65m of the wing - the rear wing has now double vertical flaps - the rear wing is lower.

After the test day the best Toyota was 5'' behind the best Audi. During the first qualifying period on Wednesday Loïc Duval is the fastest and no other driver can do better as he. The three Audi take the three frist places on the start grid following by the two Toyota.

Although Loïc Duval takes the pole position Allan McNish takes the start in Audi car number 2. He lets him overtaken from the first curves by the Audi car number 1 of André Lotterer who is fighting against the Toyota car number 7 of Nicolas Lapierre. The French driver briefly takes the lead before behind demoted in second rank. The Japanese team follows since Anthony Davidson is third on car number 8 in front of McNish's car number 2 and Lucas Digrassi on car number 3.

During the 10th minute running, the race must be interrupted further to the violent accident of Allan Simonsen on Aston Martin car number 95 in Tertre Rouge. He is in first position of his category in front of the Porsche car number 77 of Patrick Long when he crashes. The 34-years old Danish driver succumbs his wounds.