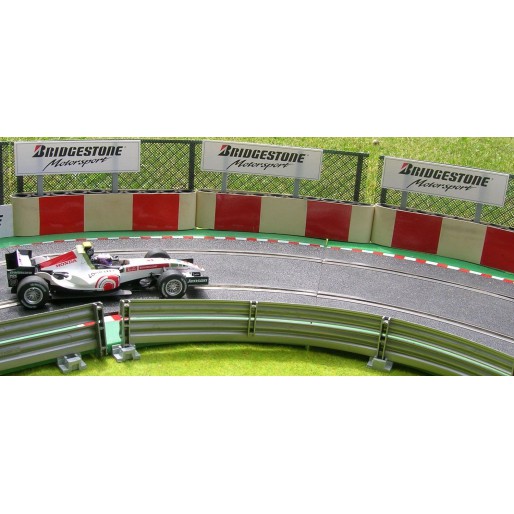 These are strips of thin white rubber which wrap around the Tyre Walls. Each is long enough to go around two lengths of tyre wall, making a Half Straight 175mm section long. These can either be with blocks of colour (red or blue) on the front or plain white or plain black. With these you can leave them plain or add logos to them.

These covers are based on the fact that F1 circuits often put a long strip of rubber like a conveyor belt around the tyres to spread the impact of a car running into them. Otherwise the sharp noses of modern F1 cars could strike in between two stacks of tyres and go through the tyre barrier to whatever was behind.

They have self adhesive backing with a paper cover which means they can be stuck on to the tyres as they are wrapped around and will just overlap enough to make a secure join at the back. For a more permanent effect a small amount of hot glue can be squeezed in between the tyres and the cover (even this can be removed however and the glue comes off the tyres relatively easily if you want to use bare tyres again).

This pack is enough to cover 10 lengths of tyre wall.