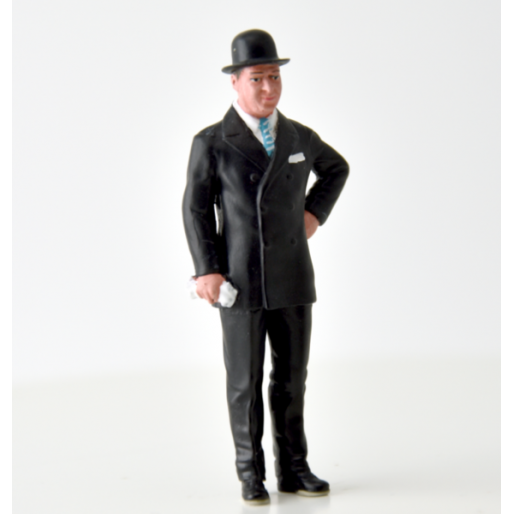 Born in Milan in Italy on September 15th, 1881. He spends his youth there. From the age of 14 he confines a passion for the mechanics. He builds his first 4-wheeled vehicle in 1899 and participates in motor racing in Italy.
Engineer of instinct more than training he is an avant-gardist visionary in the taste of luxury. He draws plans which constitute bases for his engineers whom he chooses among the best and the most talented.
In 1909 Ettore founds his own brand in the German Molsheim city. With his son Jean in 1924, he presents Bugatti Typ 35 which wins with its variants more than 2000 victories in competition. Throughout their collaboration, they will deposit more than 1000 patents. During the crisis of 1929 Ettore saves his company in - extremis of the bankruptcy by making 80 railcars with engines of Bugatti Royale Type 41. He even tries to design a plane De Monge-Bugatti.

In 1937, Bugatti wins its first victory in 24 Hours Le Mans with Bugatti Type 57G driven by the last French work drivers; Jean-Pierre Wimille associated with Robert Benoist. In 1939 it is on Bugatti Type 57C that Jean-Pierre Wimille and Robert Veyron win again the most famous endurance race. It is this vehicle that kills Jean accidentally during a test on August 11th, 1939. Ettore will never recover from it.
From 1939 to 1945, the factory is annexed by the Nazis and to the liberation Ettore Bugatti has to fight in justice to get his factory back, seized by the French administration. But debts and lack of money prevent him from developing normally the Bugatti Typ 73 and 78.
He dies on August 21st, 1947 from the consequences of a stroke. His death and the economic difficulties of the post-war years will get the better of the factory and the brand.