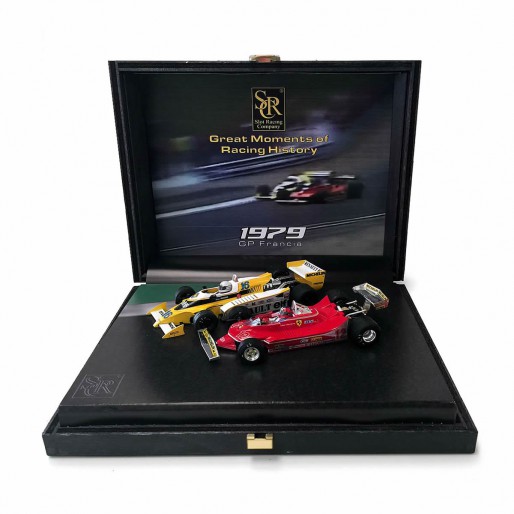 Units made and numbered to 720 copies.

This Wooden Box is very special because is made in 100% natural painted wood, with some metal details outside and with the two F1 Car inside.

Box, cars and inside glasspack are numbered and are a limited edition of 770 units.

The end of the 1979 French Grand Prix is ​​still remembered by the old fans for the relentless fight between René Arnoux's Renault RS10 and Gilles Villeneuve's Ferrari 312T4. We present the Special Edition box that recalls this unique moment of Formula 1 bringing together both models with the decoration of the GP of France.

Fruit of two years of work, Renault had presented in the GP of Spain of 1979 the revolutionary RS10, first car with turbo engine. During its development phase the Renault turbo had been mocked in the paddock for its continuous failures, earning the nickname "yellow teapot", but the tenacity of the pilot and engineer Jean Pierre Jabouille ended up bearing fruit and the jokes of the teams rivals soon became concern.

His biggest opponent was the Ferrari 312T4, which presented a more conventional concept. Designed by Mauro Forghieri as an evolution of the 312 B3 model of 1974, it was a very reliable car that would take Jody Scheckter to the 1979 Formula 1 World Championship, followed by his partner Gilles Villenuve. The full of Ferrari that season was completed with the victory in the Championship of Brands ahead of Williams.

The French GP was held at the Dijon Circuit, one of the fastest in the championship and ideal terrain for the turbo plus power. The two Renault Jabouille and Arnoux took the pole, as expected, but after a bad start of both appeared an unexpected guest: the Ferrari de Villeneuve that began leading the race. Little by little Jabouille took advantage of the performance of the turbo engine and on lap 47, after overtaking the Canadian, he took the lead, since he would not leave until the end. Arnoux had stayed behind, but was climbing positions furiously thanks to the brute power of the RS10. With just two laps to go, he overtook and overtook Villeneuve to take second place. However, the race was not over at all. Neither driver was willing to give up, and during the last two laps the Renault and the Ferrari ran to the limit in an overtaking frenzy, coming to touch several times to try to gain the braking. Finally Villeneuve would finish in front, with Arnoux stuck to his rear wing.

When getting out of the car, both pilots melted into a hug. They were rivals on the track, but also personal friends who had gone up from the lower categories based on talent and recognized the worth of the other.

Jean Pierre Jabouille had entered the finish line twenty seconds earlier to get the first victory of a turbo engine after 28 years of atmospheric engine and inaugurate a new era of Formula 1. But what has remained for the story is the battle between two great pilots who refused to surrender.