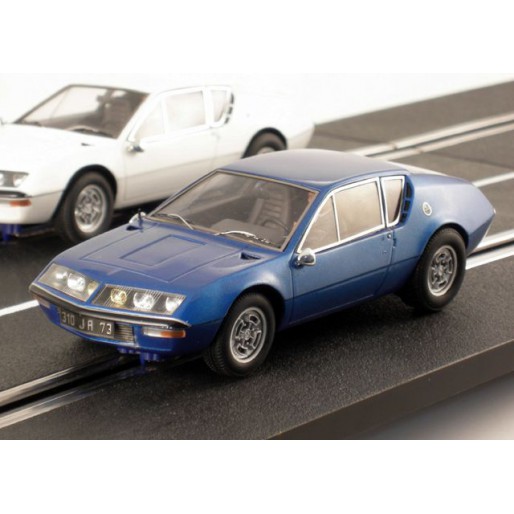 The Alpine brand almost arose by chance from the passion for the piloting that had confided Jean Rédélé in the steering wheel of his 4CV at the end of the 40s.

A310 joins in the will and the obligation for Alpine (decrease of sales) to renew the range. From 1968, Jean Rédélé thinks in a Grand Tourisme (GT) to support the berlinette very (too much) sporting and already ageing. The basic idea remains the same, the reliable and not expensive mechanics of series installed in a body in resin of fiberglass on an at once light and stiff frame.
A new datum concerning the comfort and the habitability ( 2+2 ) comes to be added to the technical specifications. As regards the engine, it has been used the Renault 4 cylinders and 1600cm3 engine.

As he did it before with the Berlinette, Jean Rédélé brings a personal and original style in the lines of his new GT. From September, 1968, the first model is ready but it is going to undergo still numerous modifications before the prototype is presented to the Show of Geneva in March, 1971. And the model of production will differ still appreciably from the prototype to put itself in accordance with French VCA certification.

The development of this model is long and more expensive than expected (reminder of all A310 produced during the first year to review the exhaust pipe).
From 1971 till 1976 included, A310 will not be deeply modified.

The model which we choose to reproduce here is the one of 1973 which takes the main components of both version of 1971 and 1972. We can notice the place of air inlets NACA near the windscreen. This arrangement is to be compared on the other previous years.  The handles of the Berlinette are replaced by push-buttons. Headrest of series equips the car and empties pockets are located into the central tunnel. Windscreen wipers are in unusual position of “Bravo”. The side air inlets receive a hub cap of black plastic.The production of this model was 658 coupés. Its sale price in 1973 was 49 100 F.
The model car is driven by its creator, Jean Rédélé.