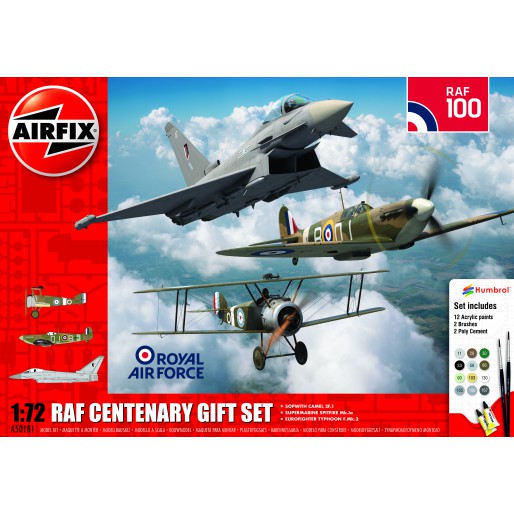 On 1st April 1918, the amalgamation of the Royal Naval Air Service and the Royal Flying Corps into a single air fighting force saw the birth of the Royal Air Force and with it, the establishment of the world’s first independent air arm. Over the course of its illustrious history, perhaps no other aircraft type has represented the strength and capability of a modern RAF more effectively than the fighter, defending Britain from attack, whilst also captivating the imagination of the general public.

Flown by heroes and carrying the pride of a grateful nation into the air with them, these aircraft are often regarded as the most exciting machines created by man and during the past 100 years, the Royal Air Force has been equipped with some of the most capable fighting aeroplanes the world has ever seen. The Sopwith Camel was without doubt one of the first great fighter aircraft the world had seen and was responsible for shooting down more enemy aircraft than any other type during WWI, despite its relatively late entry into combat. Possessing speed, firepower and manoeuvrability, in the hands of an experienced pilot, the Camel was a formidable opponent and became the mount of many successful RAF aces.

Arguably the most famous aircraft to ever wear the roundel of the Royal Air Force, the Supermarine Spitfire is surely the epitome of fighter aircraft design, with its sleek profile and distinctive elliptical wings making it a particularly beautiful aeroplane to look at. Beneath this aesthetically appealing exterior lay a ruthlessly effective fighting machine that proved decisive during the Battle of Britain and saw constant development throughout WWII, with over 20,000 aircraft eventually produced.

The Spitfire equivalent of today’s Royal Air Force is the spectacular Eurofighter Typhoon, one of the world’s most capable fighter aircraft, which possesses all the attributes that made both the Camel and Spitfire so successful in combat. As the most effective air defence fighter to ever serve with the RAF, the Typhoon is destined to be protecting Britain’s skies for many years to come and will hope to earn a reputation as distinguished as those of its famous fighting forebears.

Airfix Gift Sets are ideal for more advanced modellers and include glue, acrylic paints and brushes.