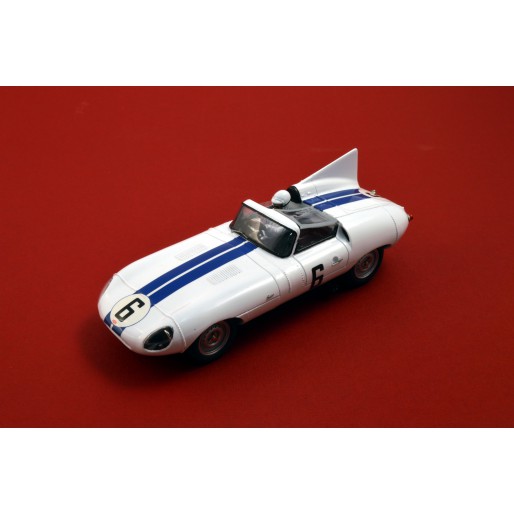 Bodywork, chassis and pilot's panel fabricated in high quality resin of polyurethane with great resistance to impacts. The models are completed with parts made in photoengraving, nickelated white metal, crystal, plate glasses in PVC. Tyres and spokes are self-made. Besides, the drivers are based on the model's era, which gives a particular and artistic touch to the differents models. 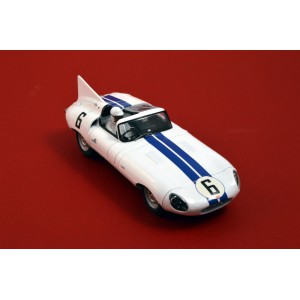 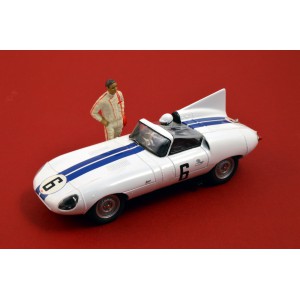 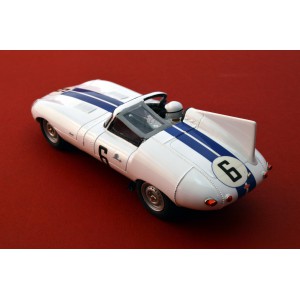 Few models can synthesize the spirit of a prototype as the Jaguar E2A. Despite not having an extensive competition career, it combined technology and track experience with features that any production model should have.

Thus, the E2A could be considered the missing link between the models D and E. Under his sharp body there were many components from the old D anchored to its semi-monocoque chassis. Perhaps the biggest difference was its independent rear suspension in-board brakes.

In February 1960 the prototype made the first tests. It featured a six-cylinder and three liters (EE1301-10) drive motor, powered by Lucas injection. Prior to the participation at the official test at Le Mans, the motor is changed for the EE-1307-10. The results are promising but some stability problems are found which are tried to be solved adding a vertical fin behind the pilot's head. The car's appearance, unpainted with number seven, is very different from what we will see in June.

Despite several tests with a five-speed gearbox, finally the usual four-speed version which was used in the D is chosen, along with the old, fixed engine. The car is painted in the typical Cunningham (who was the prime mover of its participation) team American colours, while Dan Gurney and Walt Hansgen are chosen as the crew.

The Jaguar E2A starts promisingly, going third in the first lap, but soon the engine problems start and at the end of the third lap it's forced to drive in the pits. It seems that a piston is damaged and even though the vehicle remains on the race it will definitely withdraw after ten hours and 89 laps.

Once the 24 hours were over, the E2A was returned to the factory where a new 3,800 cc engine (EE5028-10) and Weber carburetors were set up, which meant a change on the front hood. The other most significant modification was the replacement of the windshield by one of lesser height along with a change of tyres, from Dunlop to Firestone.

The car was signed up in five races by the Cunningham team for the rest of the year, with Walt Hansgen driving in Bridgehampton (1st) and the 500 Milles of Road America (3rd in the general and 1st of class CM). In Riverside Jack Brabham was signed up for Los Angeles Times G.P. (10th) and Bruce McLaren drove at Laguna Seca, in the Pacific G.P. which is run with two races, achieving 12th and 17th (14th final position).

After the American tour, the vehicle was returned to the Jaguar factory where it was used for the set-up of the Dunlop Maxaret braking system. It was stored until 1966, and after being painted green English, he was assigned to be the test bed for the future model XJ-13, including the V12 engine. Under the skin of the old lamb, the young wolf was hiding... aesthetically, he had just lost his sharp rear fin.

It was once again forgotten until the enthusiasm and commitment of a couple of Jaguar collectors (Penny Griffiths and Roger Woodley) managed to save it from being dismantled. His first public appearance was at Brands Hatch 1970 (pre G.P. F-1), repainted in the Cunningham team colours and owned by Jo Siffert. Since then, this icon of motorsports has frequented selected places and has been the star of some millionaire auctions.

We can find the same spirit of Briggs Cunningham (pilot trainer, builder, collector... ) and his team, in César Jiménez and Slot Classic, so it is no surprise the choice of the Jaguar E2A as the latest reference. 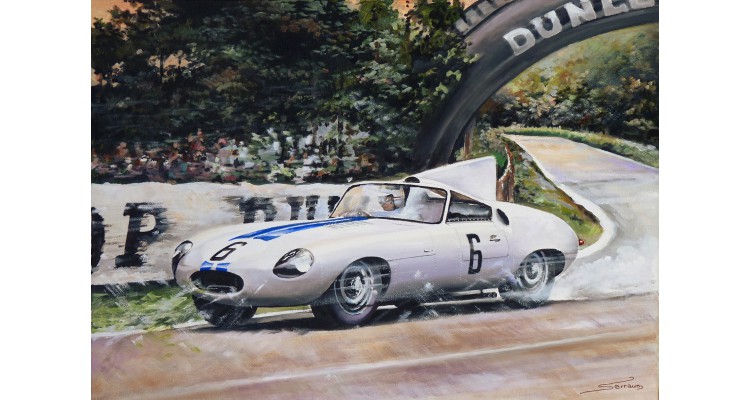