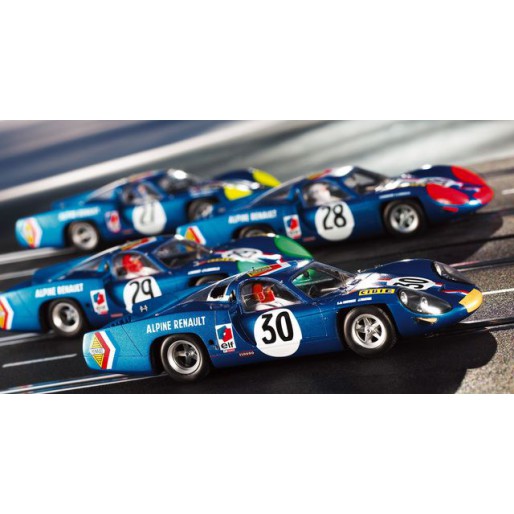 At the beginning of 1968, Renault entrusts its sports program to Alpine. This partnership is obvious on the decoration of A220 with the enlargement of the logo Renault on the tail, and of the logo Alpine-Renault on sides. In Le Mans every A220 raises a different color on their masks of headlights (the eyes of dragonflies), spoilers of the front hood and the headband at the end of the nose.

In order to remain transposable in the series, new A220 keeps the windscreen of Berlinette. The new frame of A220 remains tubular, but it is lighter and stiffer than A211 because strengthened by an arch-cage flooded in the polyester of the roof. The body is longer and wider but its height is reduced. We note the new side radiators of waters and the radiator of oil on the front hood between headlights. The wheelbase remains unchanged like all Alpine prototypes made up until there but it is the first time the cockpit is on the right.

The 4 spoke rims replace the turbo ventilated wheels. They are lighter and the tires Michelin used are wider than in 1967. Gordini supplies an improved V8 engine which can equip a GT but which only develops 310 HP compared with the available Cosworth that can spread 100 more.

During the practices made before the race the famous aerodynamic "comb" is set on the rear bonnet (finer on car number 30 than on the 3 other A220) improves the stability of A220 which is in straight lines catastrophic and has difficulty in reaching 300 kph despite the efforts of the drivers. Nevertheless the press praises the A220. Jean Rédélé himself valued at 5 kph the loss of speed due to the use of the windscreen of Berlinette in full speed.

Jo Siffert on Porsche 908 car number 31 starts in pole position. Mauro Bianchi's A220 car number 27 takes the 8th time. Whereas the track is sodden Mauro whose start was excellent shadows the 4 Porsche in the Dunlop curve. After one hour racing, A220 #29 is 5th, #27 occupies the 13th rank,  #28 points 20th and #30 is in 41st position. It comes back up in 11th position after 7 hours racing. But troubles of ignition and the bubble of the back hood which inexorably deteriorates make it waste time again.

Car number 28 reaches the 13th row when Grandsire loses control of his car on the bump of Mulsanne at night and destroys it. Car number 29 is going to know numerous electric problems; starter and rear light and technical; exhaust, ignition and finally problems of alternator that forces it to retire by early morning.

Thanks to Depailler, car number 27 comes back in 7th position then in 6th place at the 3rd hour, in front of Alpine. He starts a battle with Matra car number 24 of Pescarolo-Servoz-Gavin which goes back up slowly. At the 5th hour, while Alpine #27 is 2 laps behind the Ford / Gulf leading car, the troubles begin and it falls again in 17th rank and finds again the 7th position after 10 hours of hard battle. It will keep this position until the 20th hour. In fact at 11.30 am on Sunday morning the last Alpine A220 #27 of Mauro Bianchi but one still in competition goes out of the pit but slip out of its driver’s hands in the entry of the “Esses du Tertre” and ignites in front of the Matra of Pescarolo.

The last one A220 of the teammates Vinatier-de Cortanze crosses the finishing line peacefully to the 8th place.

Car number 30 is the only one A220 on the finishing line. Among A210, there is only one retirement and no survivor among A110. We have chosen to reproduce the Alpine A220 car number 30 in version “end of race” with removed protection of headlights and damaged back bubble.