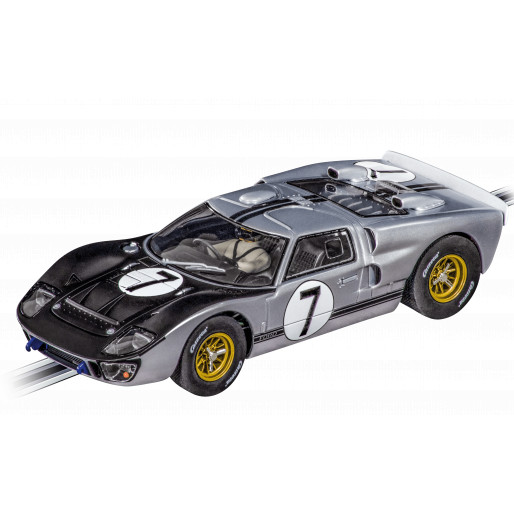 An iconic vehicle in endurance motorsport
With the Ford GT 40 Mkll, the legendary Graham Hill curved through the famous 24-hour race in the north of France. Hill is still the only racing driver to have won the Triple Crown of motorsport, i.e. victories in Formula 1, the Indy 500 and the French 24 Hours. The Ford GT 40 was redesigned especially for the 1966 season - the 4.7 liter engine was replaced by a larger, more powerful 7.0 liter engine. Graham Hill, who has already won two world championship titles in Formula 1, is still considered one of the greatest racing drivers of all time.

A legend on the Carrera circuit
The Ford was able to decide in 1966 some races, the sports car championship always in view. The 1:24 scale slot car is a tribute to the car of yesteryear. With the chic grey-black paintwork and the large No. 7, you can drive away from everyone with this vehicle on the Carrera racetrack. Equipped with front and rear lights, as well as brake lights, it reaches its top speed on the race track and stands out mightily. The car is digitally controllable and can also be individually coded.