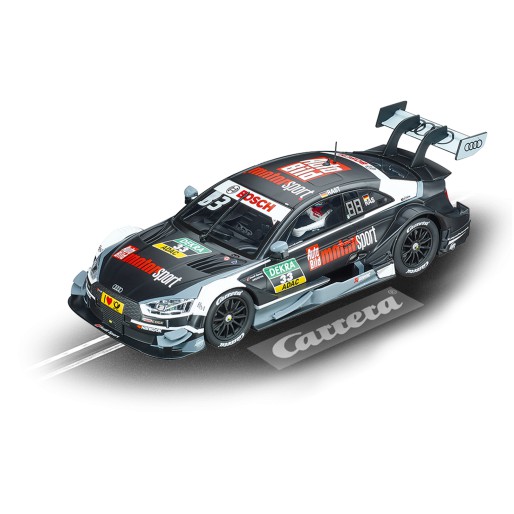 From DTM rookie to DTM champion! Lots changed in the life of René Rast in 2015. After some initial rides in a prototype, the reigning GT Masters champion was given the chance to drive for Audi in a 24-hour race in the LMP1. What then followed in 2017 was a series of prestigious victories on behalf of the German carmakers that go him what he truly wanted: a cockpit in the DTM series.

René Rast ultimately won the nail-biting fight for the championship in his Audi RS 5 DTM to become the new DTM champion in 2017. Rast sat at the wheel of a veritable beast! The Audi RS 5 DTM oozes genuine racing class with black paintwork, and featuring the 'Auto Bild Motorsport' logo on the front hood and sides. The Audi RS 5 DTM ""R. Rast, No.33"" is equipped with headlights, rear and brake lights, and turns heads with its faithful reproduction of original details. The Carrera car can be individually coded, it's digitally controllable and can also be used with analogue systems (Carrera Exclusiv). Enjoy authentic motor racing emotions at home!