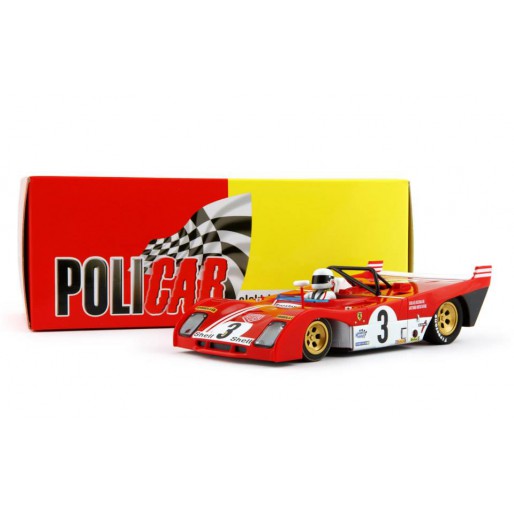 The Ferrari 312 PB was a Prototype race car, designed in Maranello to compete in endurance races. In 1972, this car won the World Championship for Makes, winning all races it took part to, including the Sebring 12 Hours. Ferrari didn't participate to the Le Mans 24 Hours. The car was powered by a 3 litres, 12 cylinders flat engine, the maximum limit for the Prototype category, based on the Ferrari Formula 1 unit: as such, it was more suitable for short Endurance races rather than for 24 hours.

The maximum power was 460 HP at 11200 rpm. The gearbox had 5 speeds plus reverse and the clutch was a triple disc unit. Chassis was based on a multitubular steel structure, stiffened by rivetted aluminium panels to form a reinforced semi-monocoque with side caissons. Brakes had ventilated discs, 26 cm in diameter at front, 28 cm at rear, attached near the gearbox. Magnesium wheels, 13” x 10”/11” front and 15” x 15”/17” rear. Overall dry weight of the 1972 car was 650 kg.

In 1972, at the 1000 kilometres of Monza, Ferrari engaged three such cars. The car number 3 was driven by Brian Redman and Arturo Merzario.