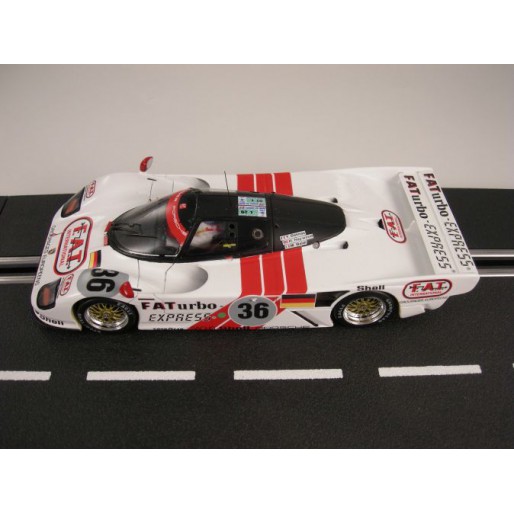 Based on a model presented at the Frankfort Exhibition by Jochen Dauer, the strategy and development of the Porsche 962 for the 1994 24 hours of Le Mans began with the optimum interpretation of ACO’s  regulations by Porsche’s N. Singer and R. Joest. By ratifying a sport racing car in the GT category, they succeeded in challenging the very nature of endurance racing. Its success was accomplished by many changes made to the original model.

Never had a Porsche 962 been so long (4995 cm) and with such improved engine performance. This was the work of the wizard R. Joest (cooling  system, water cooler with a heat exchanger for the engine oil and cooling the gear oil in the heat exchanger). The talent, tenacity and reliability of drivers were also major factors in achieving the victory. However the narrow width of tires (only 14“), the small diameter of wheels, and the heavy weight of the cars created problems with the tires and suspensions that consequently caused them to waste precious seconds at the end of the race, especially for the number 35 car.

The two qualified in the 5th and 7th positions and immediately mounted a challenge to the pole-sitting and favoured Toyota. While car number 35 was soon threatened with problems of tires and suspension, number 36, driven by Dalmas, showed either some doubt about the reliability of the car. In the evening the time required to change its left rear transmission system relegated it to the 6th position, 3 laps down.

After 9 hours racing, only 10 seconds separated the Dauer n°35 and the Toyota in front. In the morning while Boutsen won the fastest lap (3’52”54) the transmission suffered and its change caused them to lose 3 laps on the “Fat” as Irvine continued on his march on victory. Then just 98 minutes from the end, the Toyota with Krosnoff, rolled to a stop on the wrong side of the pit wall with the gear in neutral and lost the lead. The two Porsches ran first and second in the closing stages, one lap apart.
Nevertheless, on the next to last lap, Irvine passed the German car number 35 at the Ford Chicane and fended off Boutsen’s last challenge at the finish line to give the Porsches a first and third place.