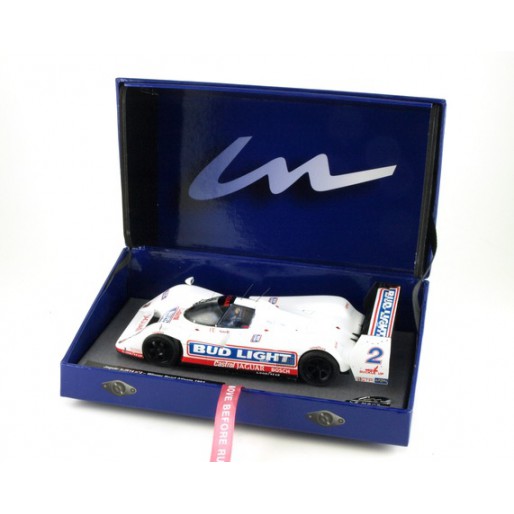 Designed in 1989 by Ross Brawn, technical Director (ex-Arrows F1) and built in 1990 by the Tom Walkinshaw Racing team, the Jaguar XJR-14 wins the World Endurance Championship in 1991. Then Jaguar decides to take the XJR-14 to the United Stated for the 1992 IMSA Camel GTP championship under Budweiser Light white livery.

At Road Atlanta, besides the other general modifications brought to the car since the previous season, the fences on the front wheels are closed, the front bonnet wing is trapezoidal shaped, and the fuel filler is on the right. If round four at Road Atlanta had been great for Jaguar in 1991, it was absolutely fabulous for Davy Jones and the team in 1992. Jones qualifies the XJR-14 with a new track record to take the pole position. During the race he sets a new race lap record and also leads the field from start to finish. Neither Toyota, nor Nissan are able to worry Jones’s XJR-14. Only one Toyota ends the race, way back in 14th place, both Nissan give up, crashed.