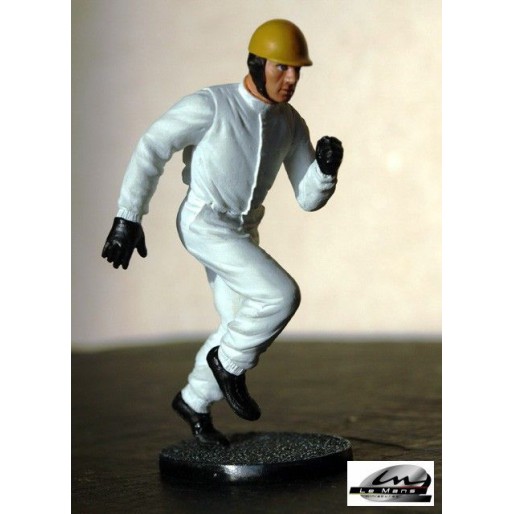 Because the drivers have to wait for the start signal to cross the track an join their racing car it is became so legendary as
unforgettable.
It has been created in 1925 for the third edition of 24 hours Le Mans. As the cars were fitted with a removable convertible top it must be checked that these tops were easy to set up and that they were solid, the regulation imposed to fix them at first and to run twenty laps with. To avoid that the drivers begin the operation before the signal they were taken away
from the cars.

In 1969 Jacky Ickx was the first one to refuse to submit to this rule which he considered dangerous. He thus walked until his Ford GT 40 and took time to fasten his seatbelt. While he left in last position, he won the race with only 20 seconds in front of the Porsche 908 of Gérard Larrousse.

Since 1971, the start is launched “in the air”, as in Indianapolis: after the first lap of warm-up, cars do not stop anymore neither at the start nor on finishing line Since 2010, in piece of news(short story) the procedure of start, the drivers run up to their vehicle. But it is just for the revival
show.

LE MANS miniatures choose to reproduce a driver running among the others by being inspired by photos of the 50s to 1965 for the helmet and the glasses. The figurine is supplied on the small basis to stand up.